The life of my flower...

And life goes on, which seems kind of strange and cruel; when you're watching someone die...

We all have known and faced about life and death, the most important of all on this earth.. and everything in between.. we have loved and lost our loved ones.. but what happens when we fall in love with someone (or something ??) bit by bit, and yet we watch them die everyday; knowing we cannot do anything about it.. We don't mourn their death, instead just be grateful that they lived..  Talking about this, almost everyone of us have loved flowers, loved receiving flowers from our loved ones.. but what do we do when they die? We throw them away.. right? But did you know, the flower already died the moment it was plucked from the plant/tree? No flower is alive right after it gets separated from its roots, just like we are not alive after our soul gets separated from our body.. That is the reason I hate giving and receiving flowers; because I'd rather exchange artificial flower bouquets, handmade cards and many other things as gifts rather than giving and receiving dead bodies (we all know plants are living beings, right?). And this thought I was never born with, but was embedded in my mind since the beginning, where my mother taught me to respect those plants just like you would respect another human being; and that's why on her voluntary retirement ceremony (now she is a medical professional), we displayed boards saying we shall not accept flowers AT ALL... instead plants can be gifted (and we had a plants vendor outside the ceremony hall to make it easier for the guests to get plants); and the same message went over on all the invitations as well. And we got so many plants as gifts that we had to hire a mini truck to carry them home at the end of the day.

I picked up the same message and I decided to carry forward the same at my wedding; and I did. We received a lot of plants for my wedding ceremony. If you have read my past posts I did not love him when I married him, you shall know ours was an arranged alliance (yeah, yeah.. my parents chose him for me to get married with), and so we had little time before our wedding, and that too in separate countries.. so he quite didn't get the point of gifting plants and not flowers; and so we got married in January, and a big flower bouquet for Valentine's day was the first and last flowers I have received ever since from him. Plants, yes. Flowers, no. No dead bodies shall be lurking around in my house..

I have always known that even if not plucked, flowers don't live that long, but I had never witnessed it with my own eyes. It's summer, and I like to go for walks in the afternoons to a nearby park listening to music everyday. About a week there, I saw some beautiful roses beginning to bloom in the park. I sit on a bench in there, so the closest to the place where I was sitting caught my attention. It was a lovely, lovely rose bud, which had just sprouted. I looked closely for a while and admired its beauty before I left.. 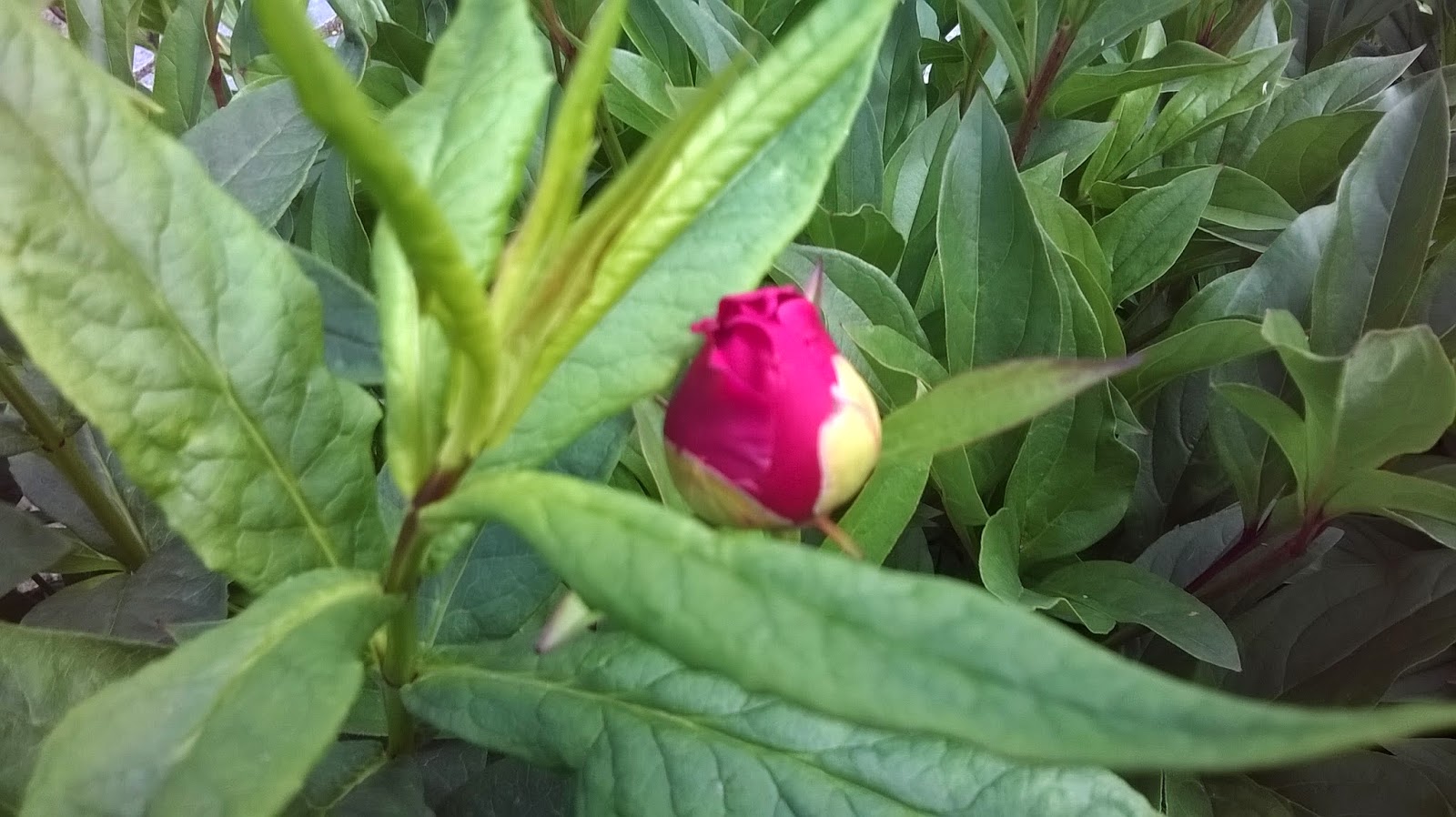 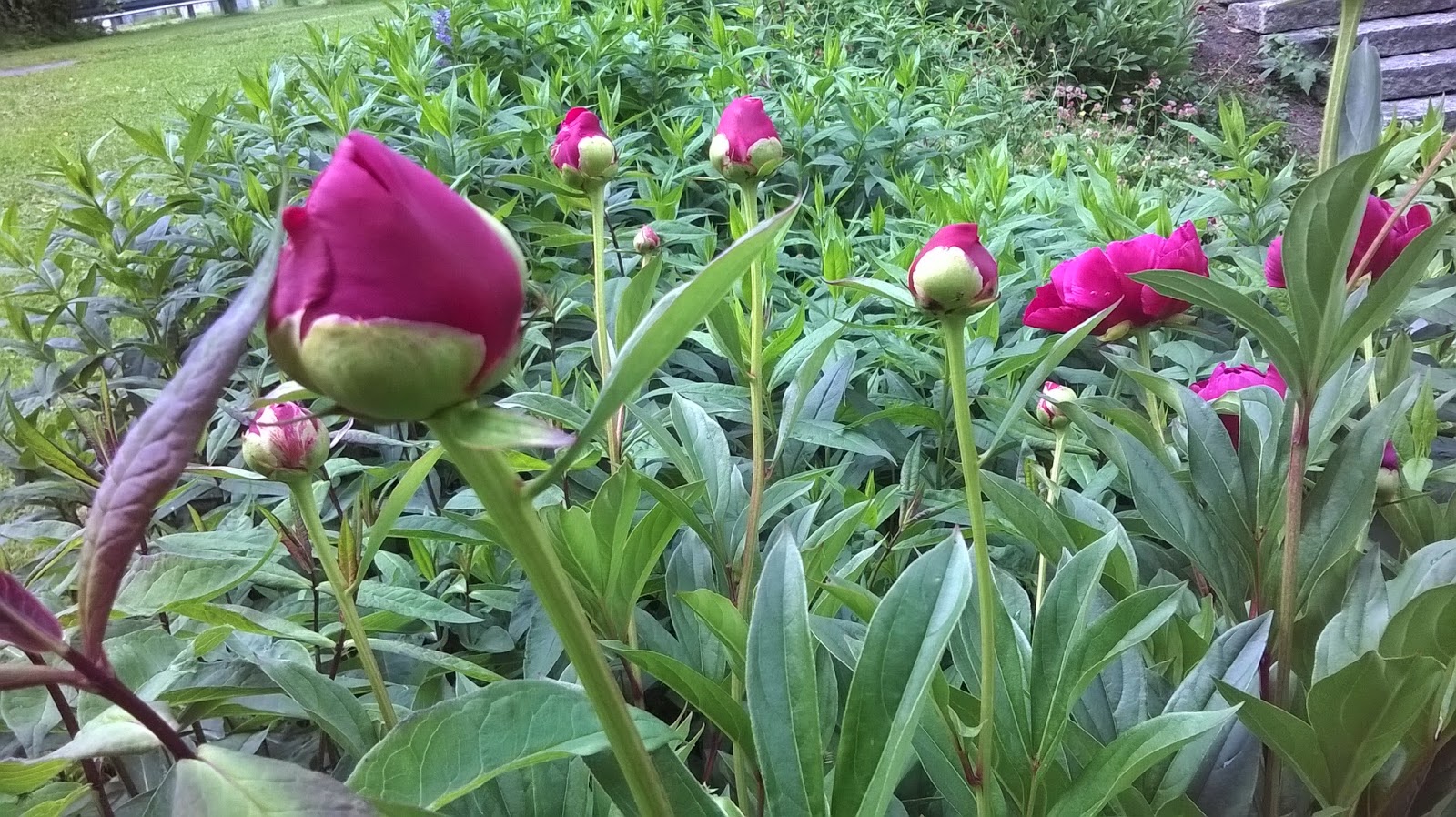 The next day I took the walk to another park, but when the day after that I visited the same park again, I saw that the little bud had already begun to become a beautiful little flower, its petals softly opening in a little diameter.. I watched it for some while until I fell in love with it; and then I decided to come to it everyday.. 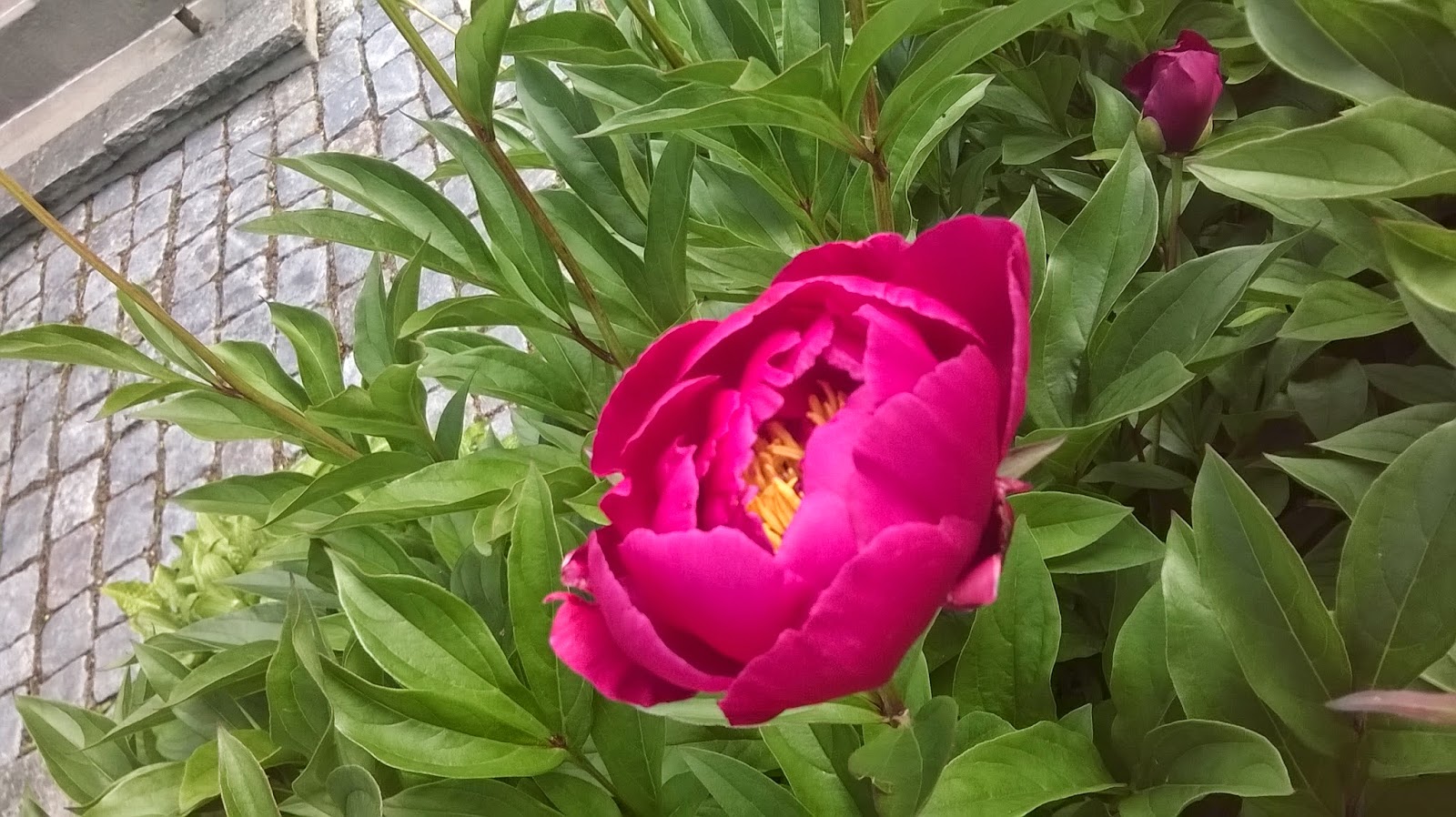 The next day was a beautiful sight.. the petals had grown a little longer, the flower opened a little more, and the windy weather made the flower's petals overlap each other in such a beautiful way you can just look and look for long.. 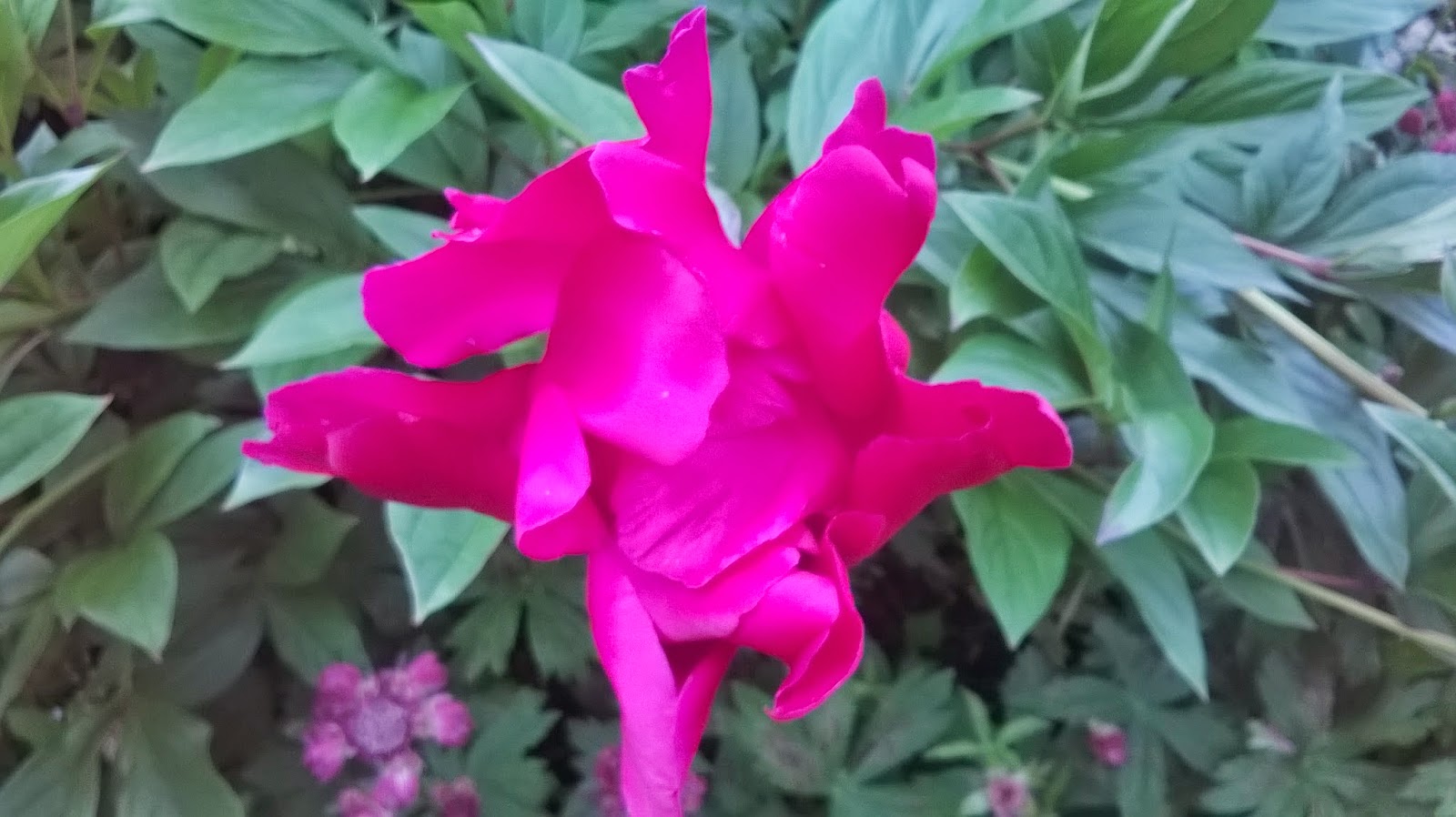 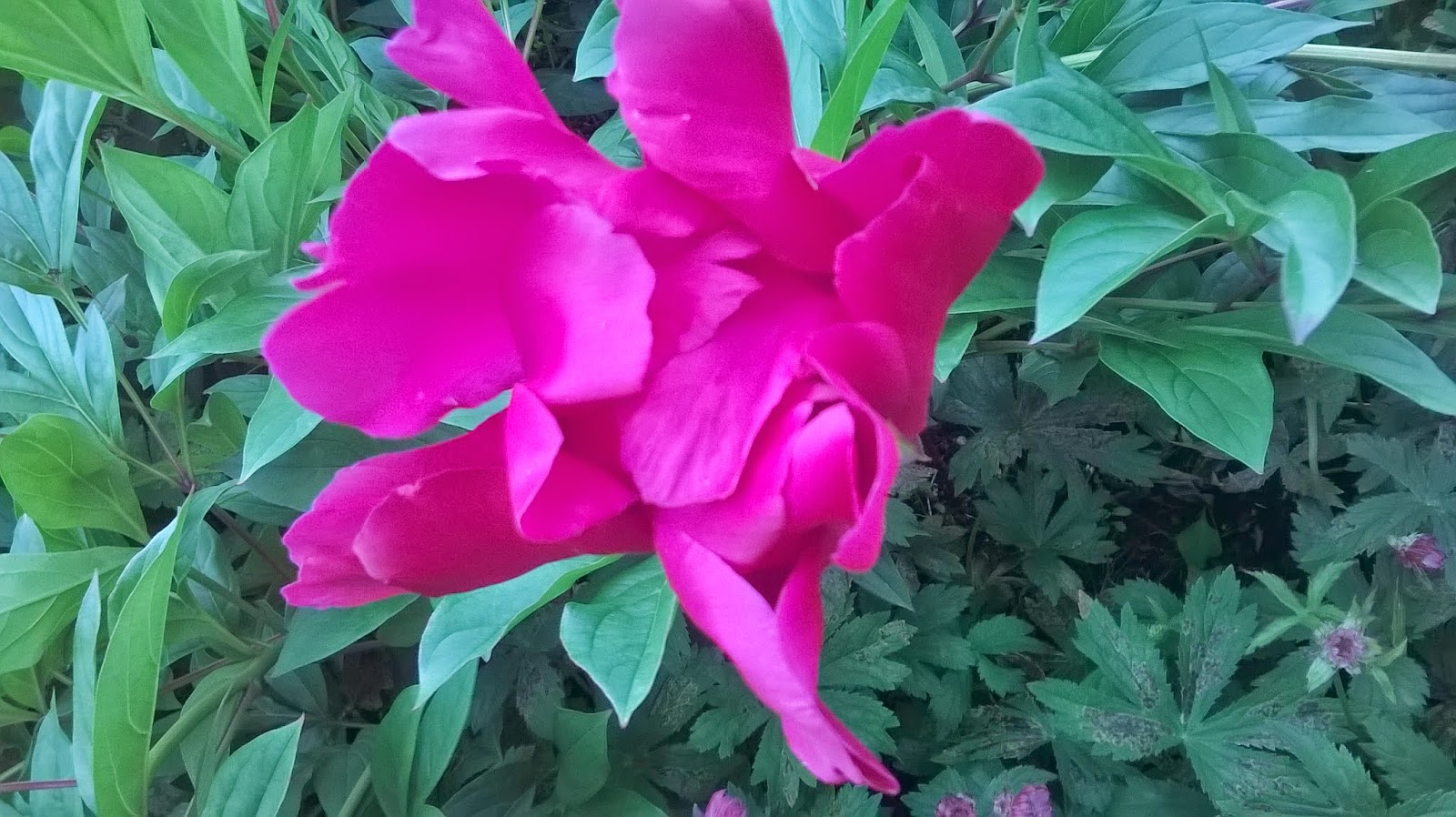 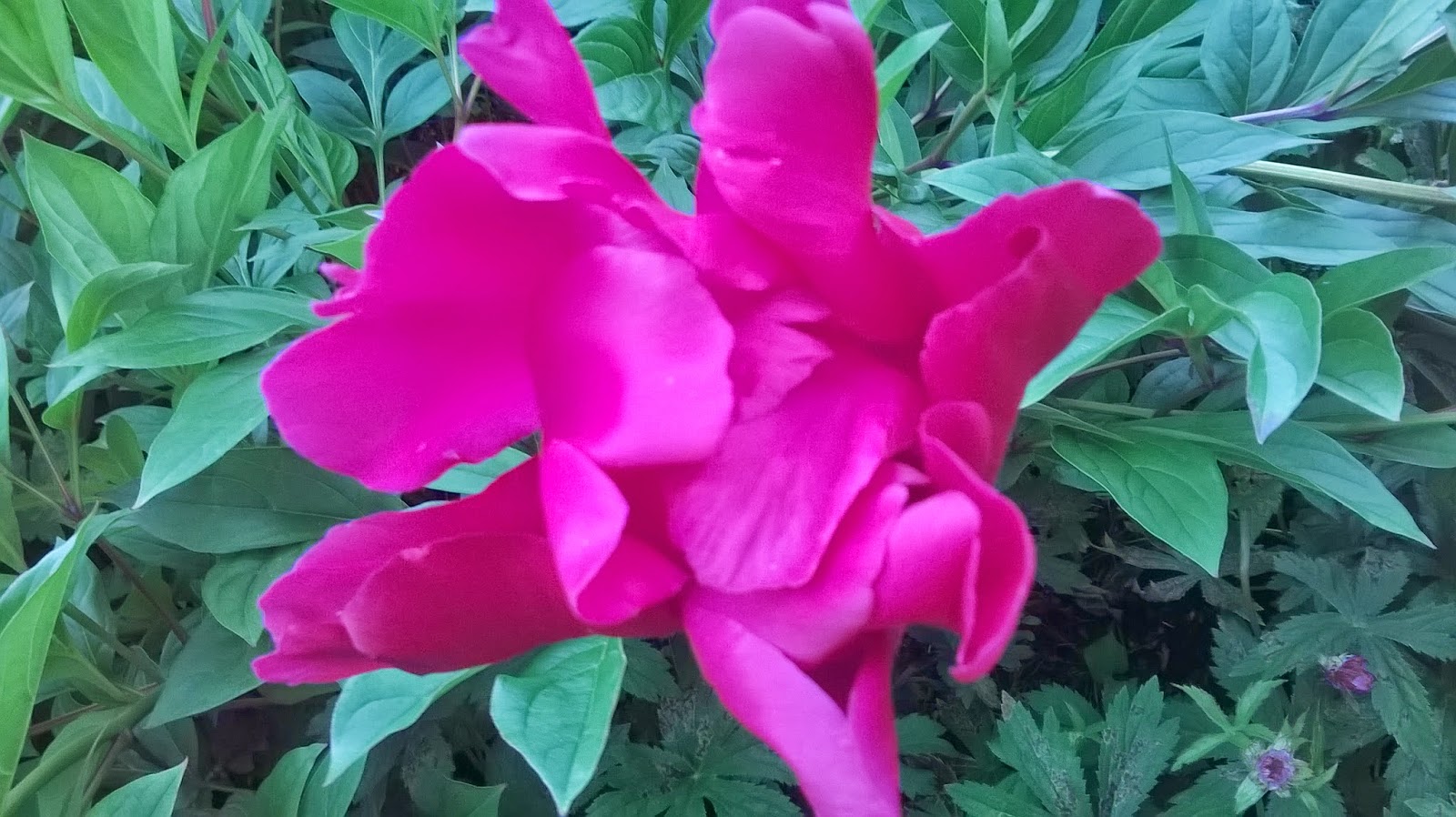 The next day I saw it with open petals and a lovely little bee at work inside of it.. and for some days after that I went to meet the flower everyday, as it grew lovelier by the day for about a week, and I saw a lot of others blooming with it.. 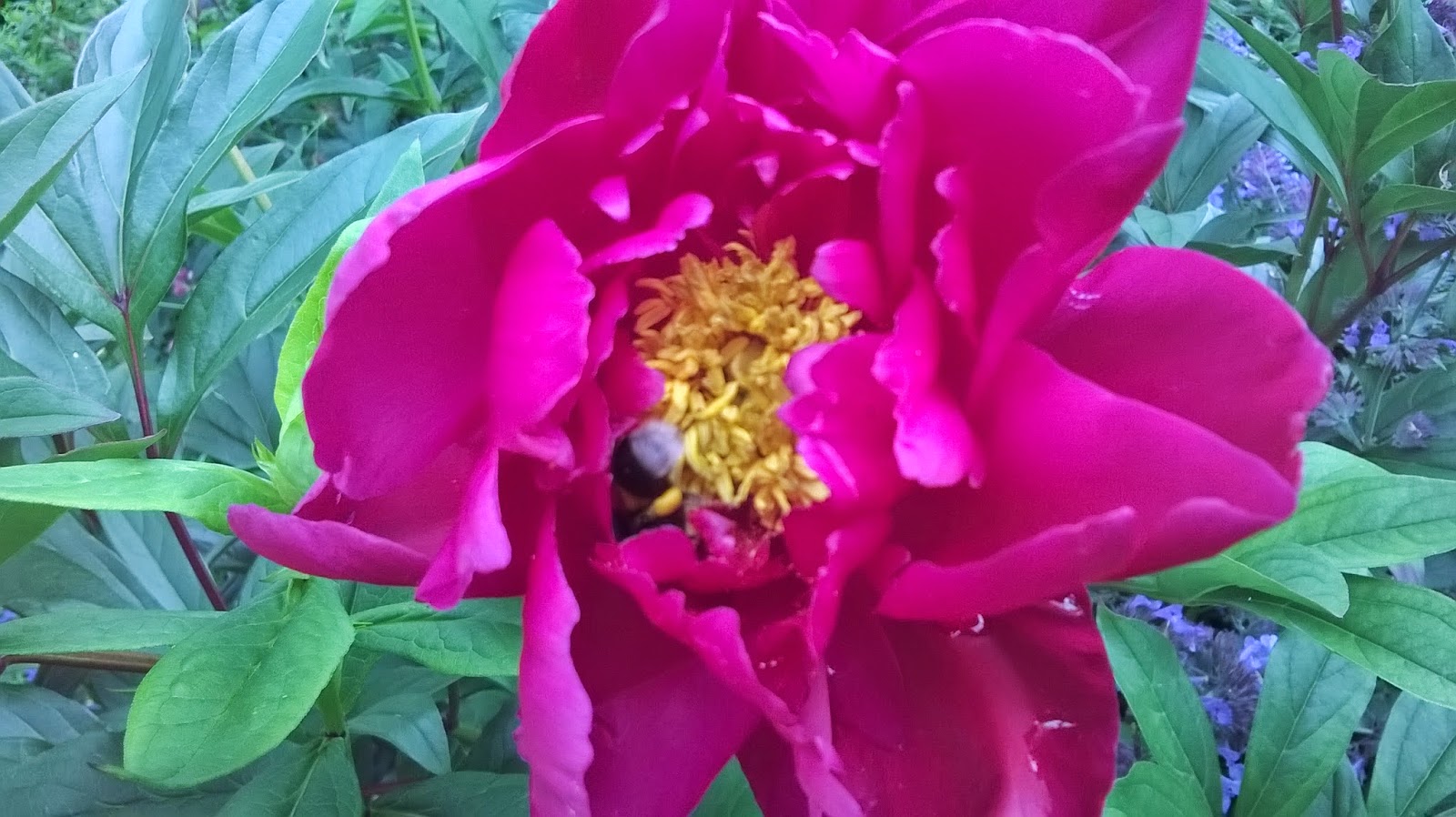 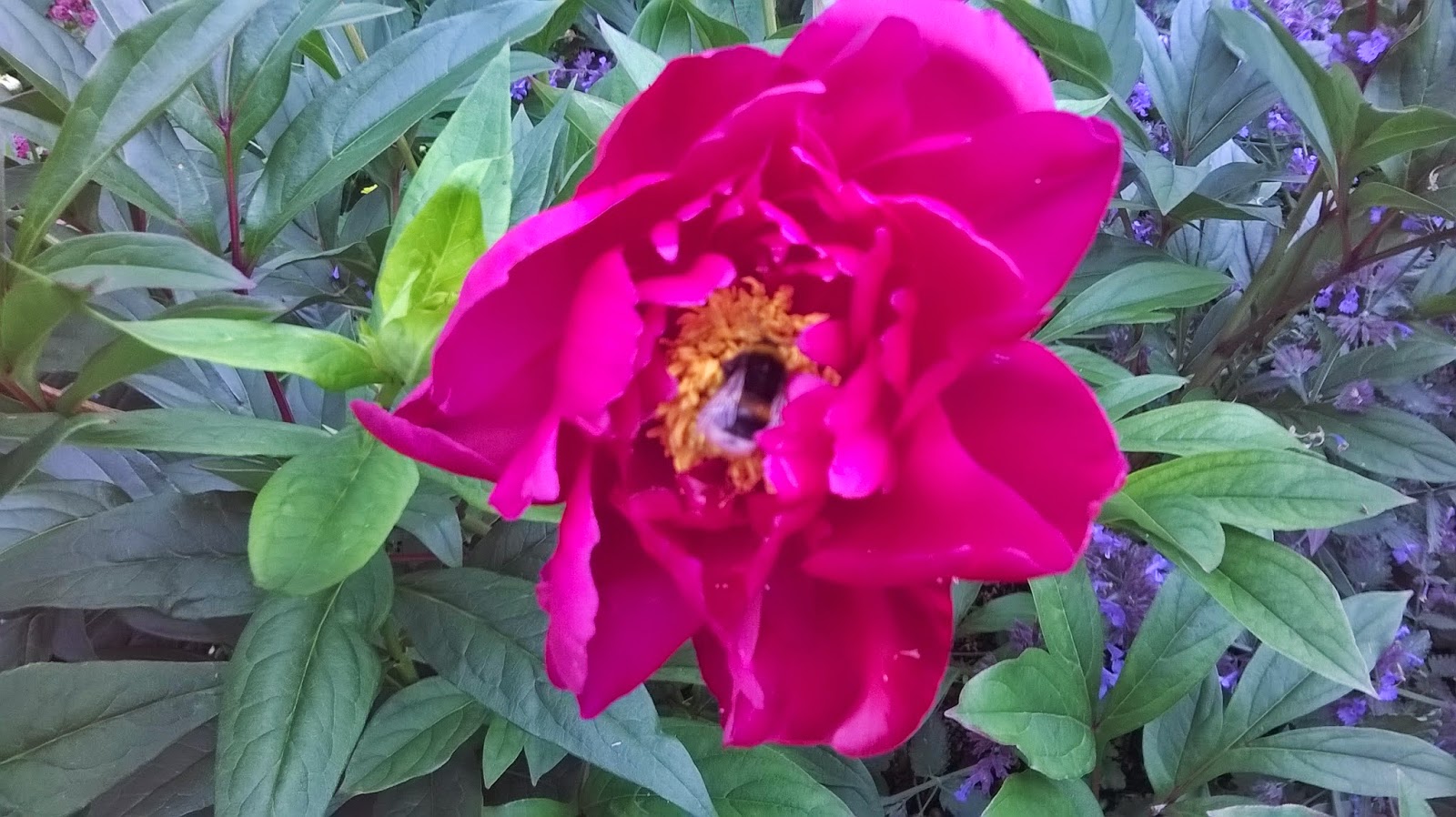 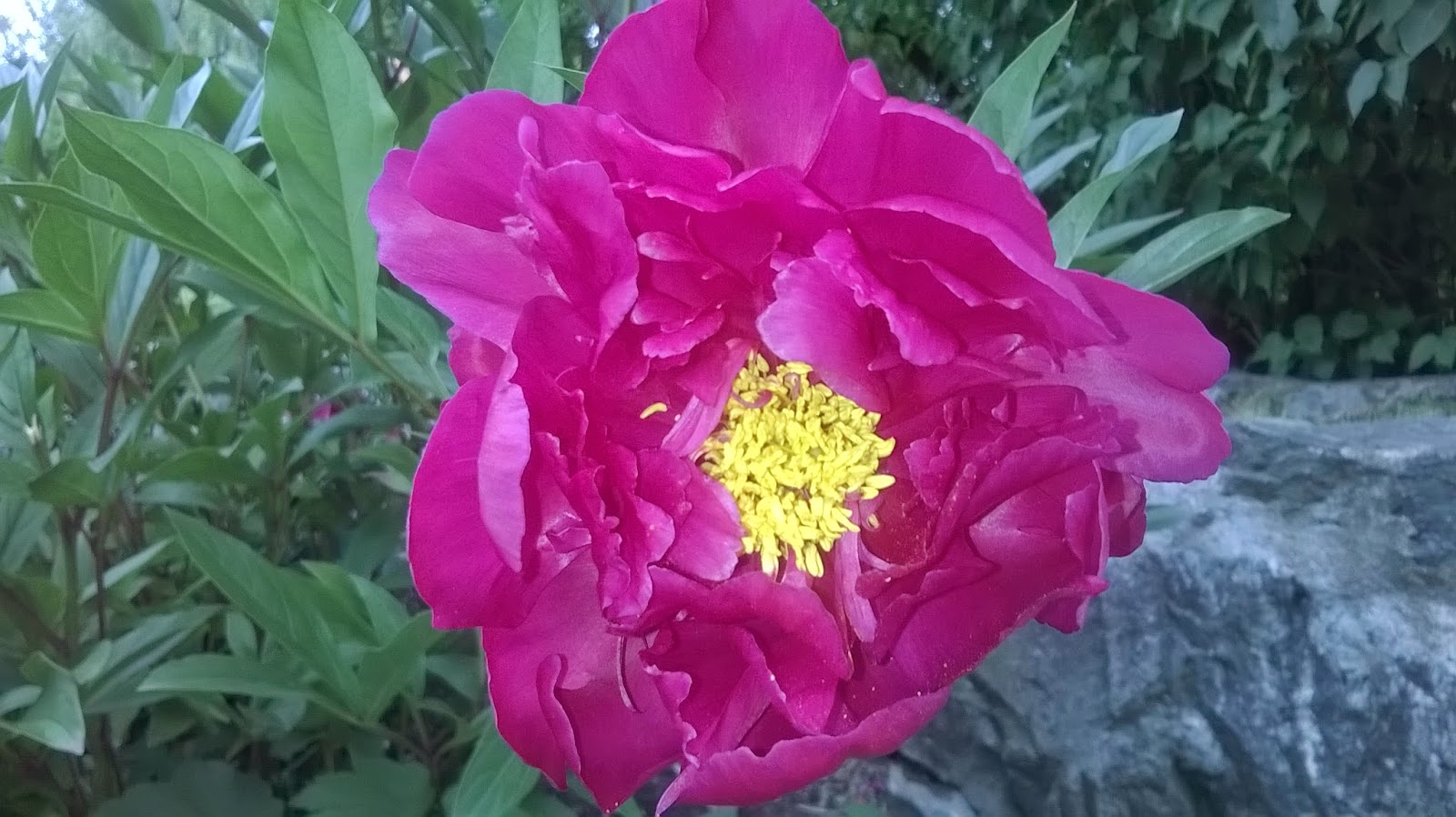 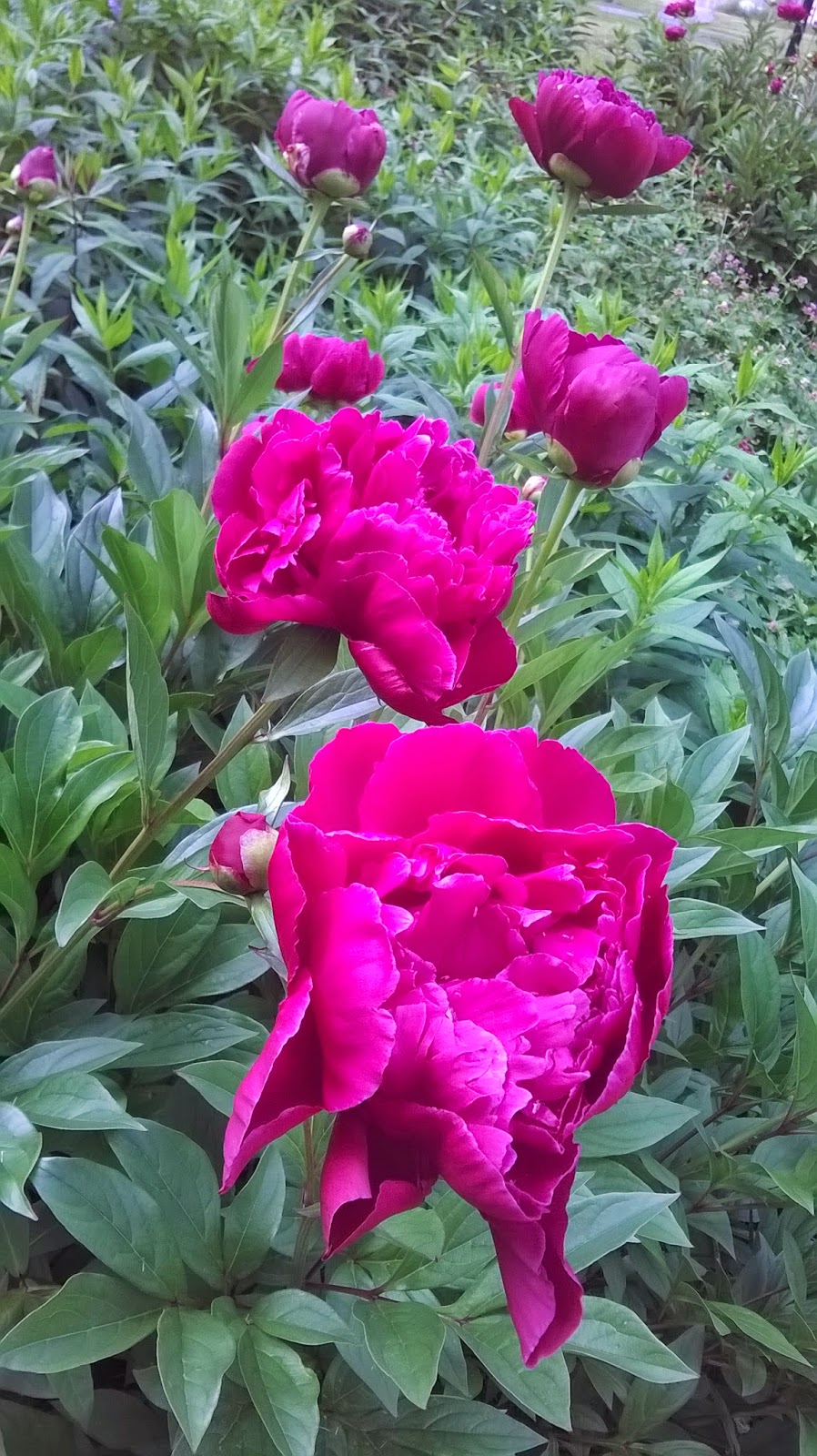 The next day as I left for the walk, strong winds were blowing and it was cloudy.. I began to think of my flower, and sure enough as I reached the park, the winds had affected it, and it was bent in one direction, as if trying to protect itself from the storm, and trying to hide itself from being blown away.. 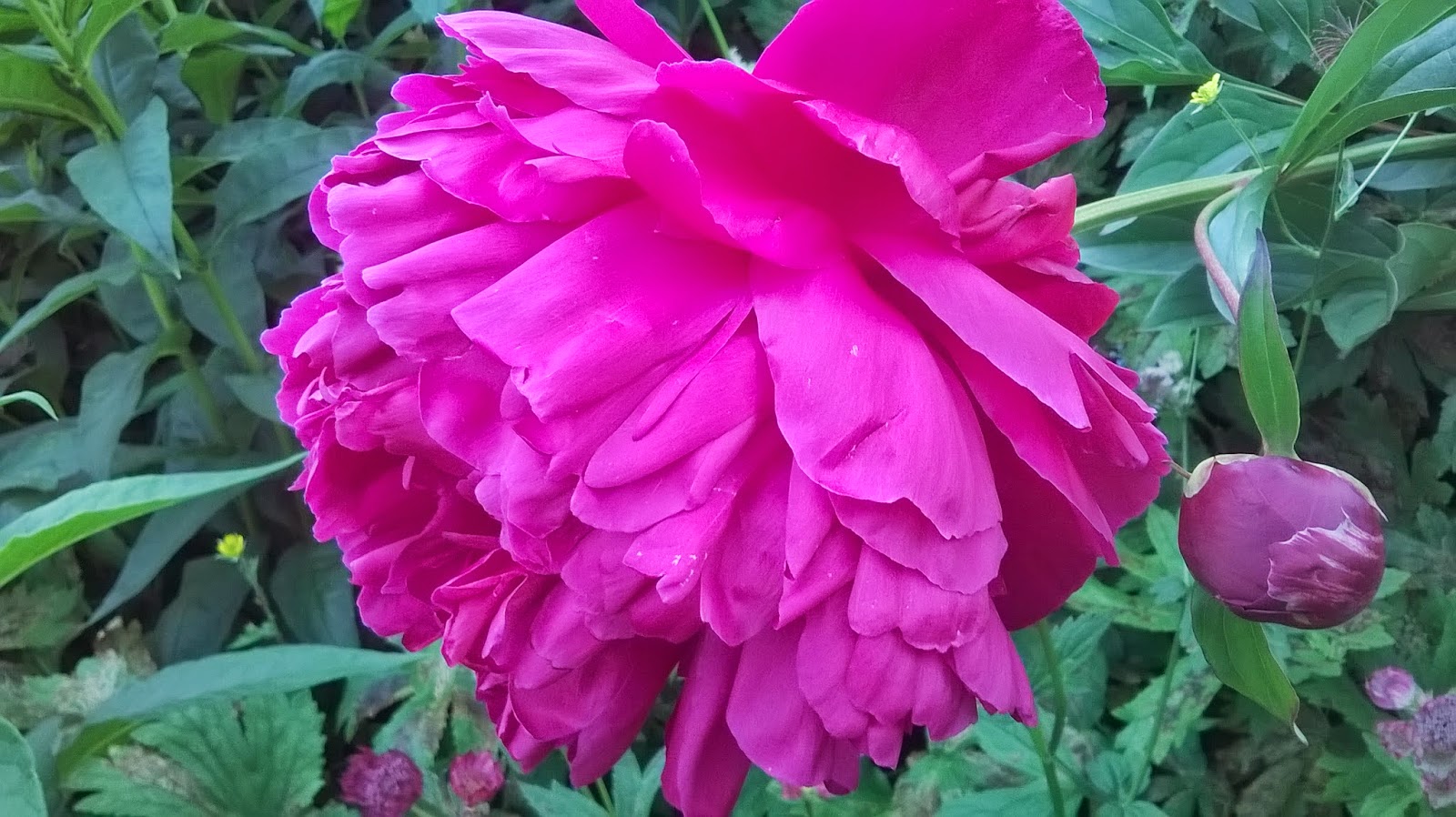 The next day it blew hard, and the clouds poured.. it rained and rained.. it rained whole morning, and I worried about my flower. Yes, in my mind, I had adopted it to be mine.. So, you know it is "my flower".. When the rains stopped, I sure stepped out for the walk, but more than walking on a cold afternoon, I wanted to check in on my dear flower. Sure enough, the hard winds and the rain had taken its toll on it, the wind had indeed blown away some of its petals, which landed far away, and little water droplets glistened on the beautiful petals... 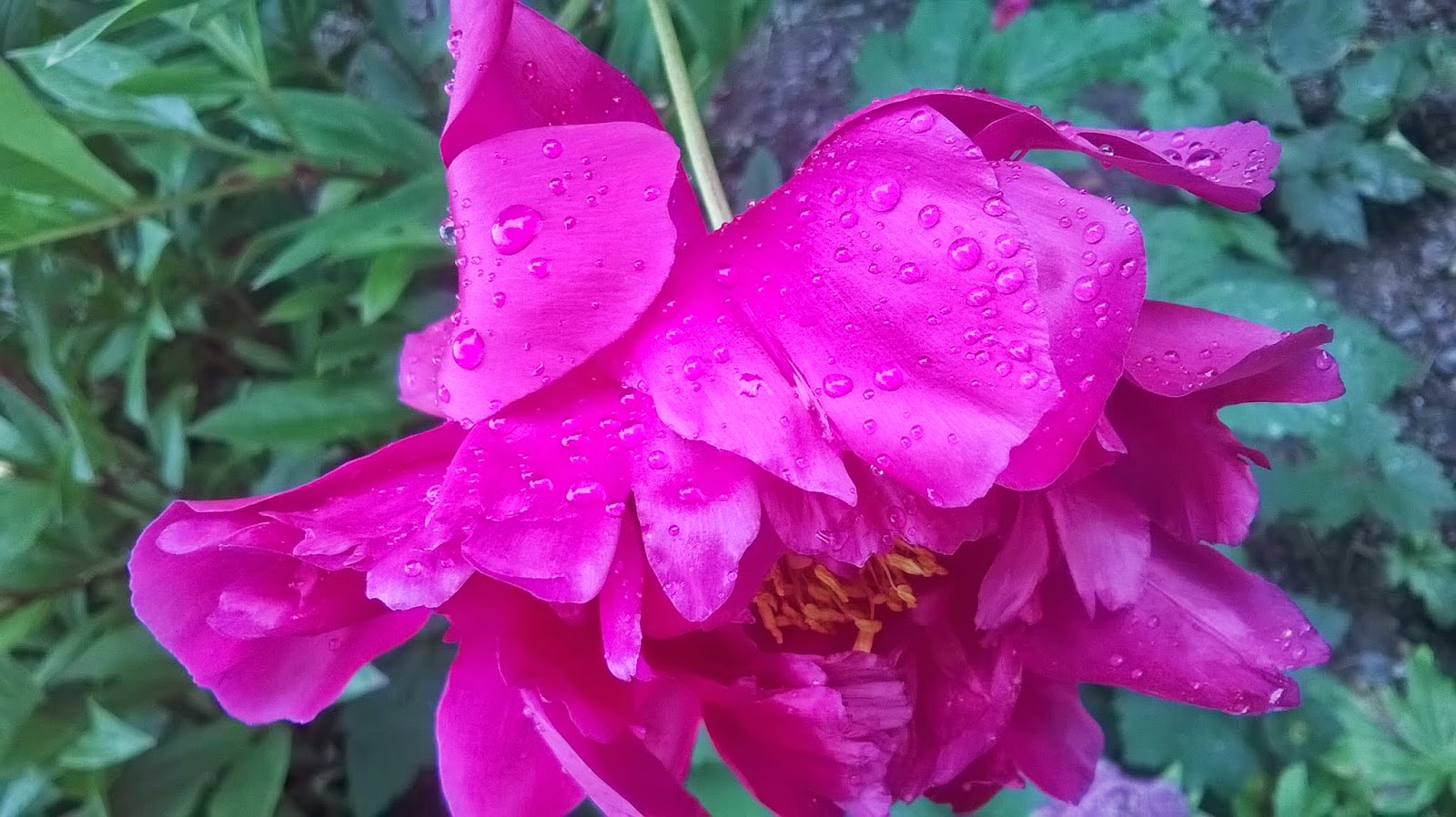 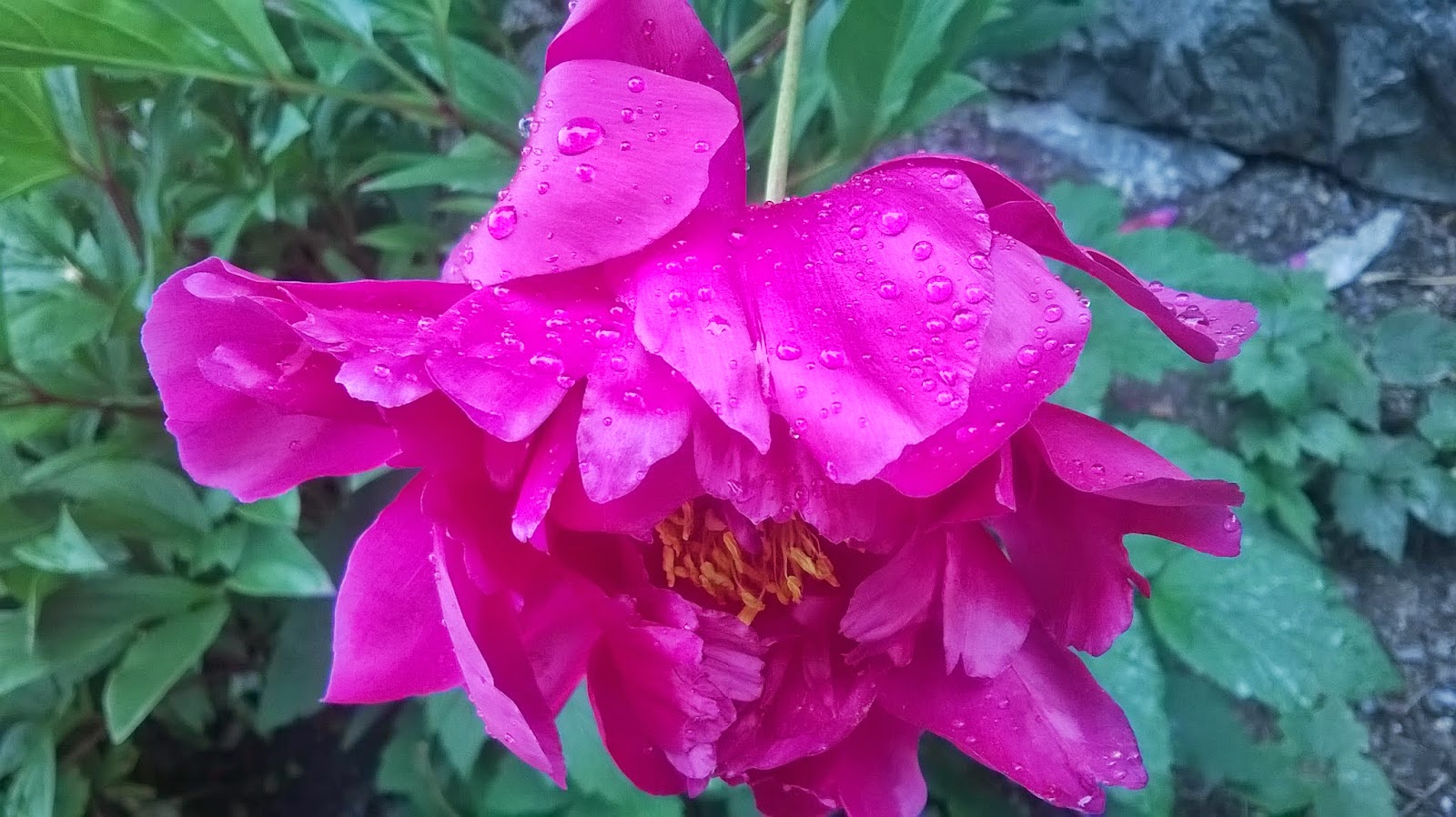 And the next day it rained as well, but not as hard; nonetheless, to my dismay, my flower had lost some more petals and it made me sad to see water droplets on the petals which were gradually reducing in number.. but it had straightened itself, as if ready to brave the winds and the rains now.. 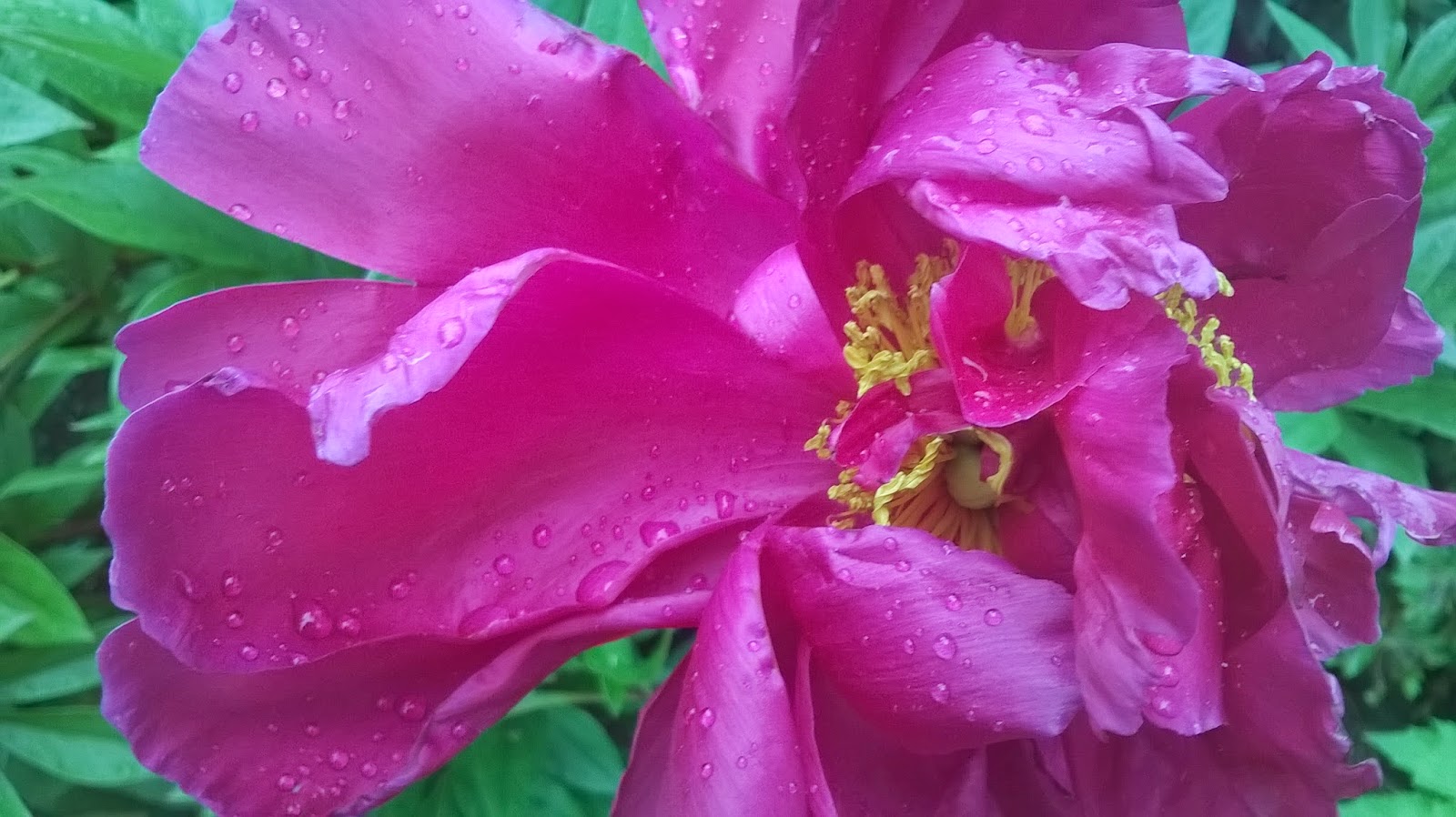 Next when I visited, the sun was shining, the rains and the clouds gone for good, the skies were blue and the weather perfect. My flower had braved the adversities of the weather and was smiling beautifully at me when I looked upon it.. but I was disappointed to see the number of petals reduced to a bare minimum. Apparently, the rose was braver and it made me smile as well, in spite of everything... 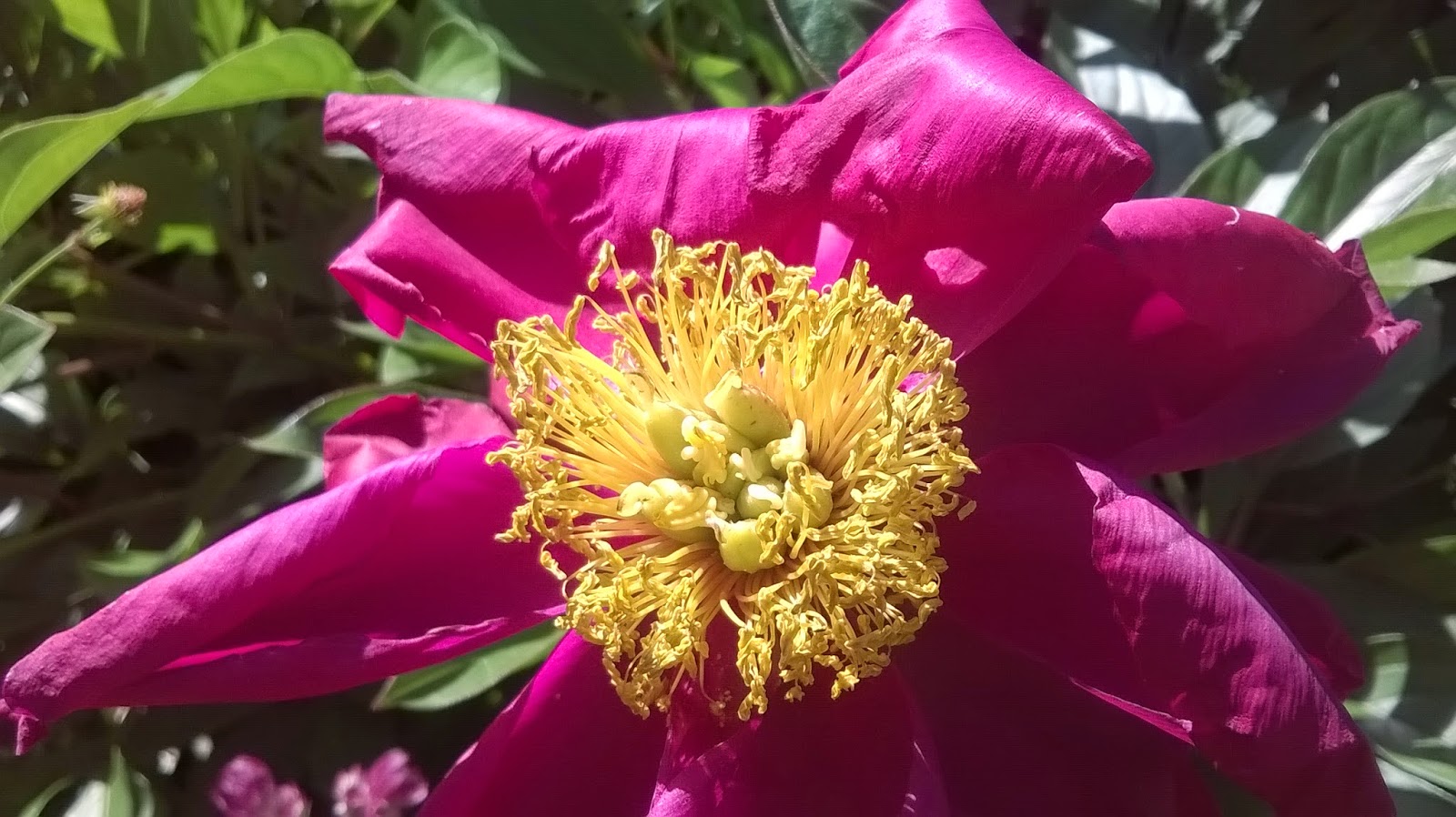 And the next day even before I started from my place, I was praying for my flower. But destiny had other plans. When I hurriedly reached upon to check on it, I was deeply saddened. I felt a pang in my heart to see it had lost most of its petals and I could count just 5 petals now.. but it was not low, it was not saddened; but was standing tall, as if ready to face its death with a smile. I could not smile this time. I turned off the music and listened to the sounds of silence, the sounds of rustling of trees, the gurgling of the water fountain, the chirping of birds and the humming of bees.. Something inside me broke. I knew this was the last time I was visiting "it".. I could not get up and leave. But I had to. And as I stole a last loving glimpse at my rose, it swayed with the winds, as if trying to cheer me up, and saying "my life was always supposed to be short, glad you discovered love with me".. 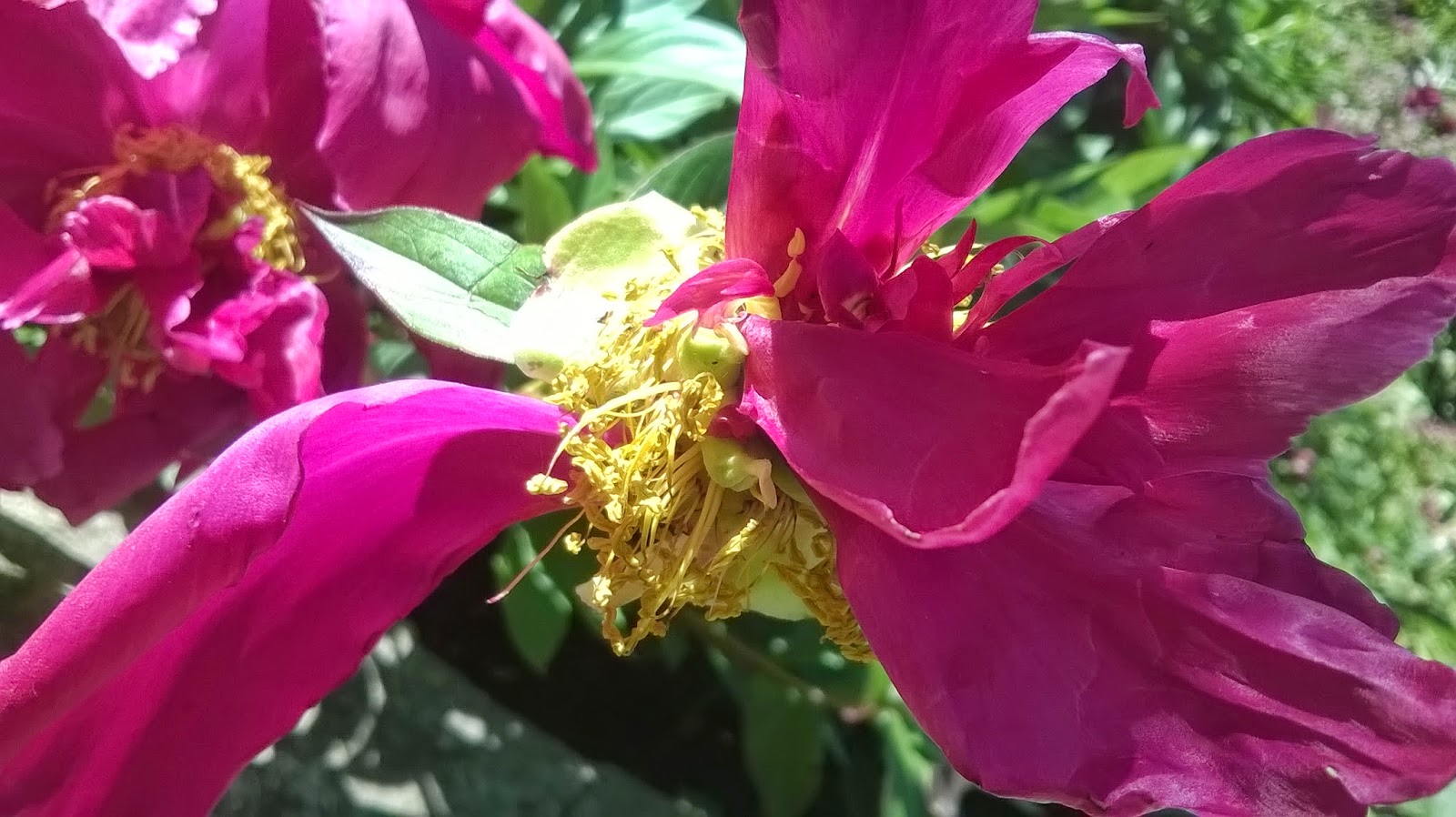 As I started and turned my back, a big breeze of wind blew which blew away my hair.. and even though I could never gather the courage to look back at the flower, I knew that it took its final breath and had lost its final petals with that breeze.. I was heartbroken. I was saddened and as I sat on another bench mid-way back home, I realized flowers are the most beautiful, short-lived creatures made by God. They come here not to live for very long, but whatever they have, they give themselves away. They make our world colourful, fill it with fragrance and beauty, distribute happiness, allow the bees to have their nectar; and then silently say good-bye and depart. Shouldn't we humans live not just for our selfish self, but learn something from the beautiful flowers, and be more giving, more helpful and less self-centred.. this way, even if we don't live long enough, we shall live long in the hearts of people we reached out, and we cared for. Just like flowers, we shall be remembered as little, loving, smiling souls.. People will smile when they take our name, long after we are gone.. Let's spread some cheer, let's give out love; and let's distribute smiles all over !!
Posted by Brijdeep at 4:05 AM

Email ThisBlogThis!Share to TwitterShare to FacebookShare to Pinterest
Labels: Photography